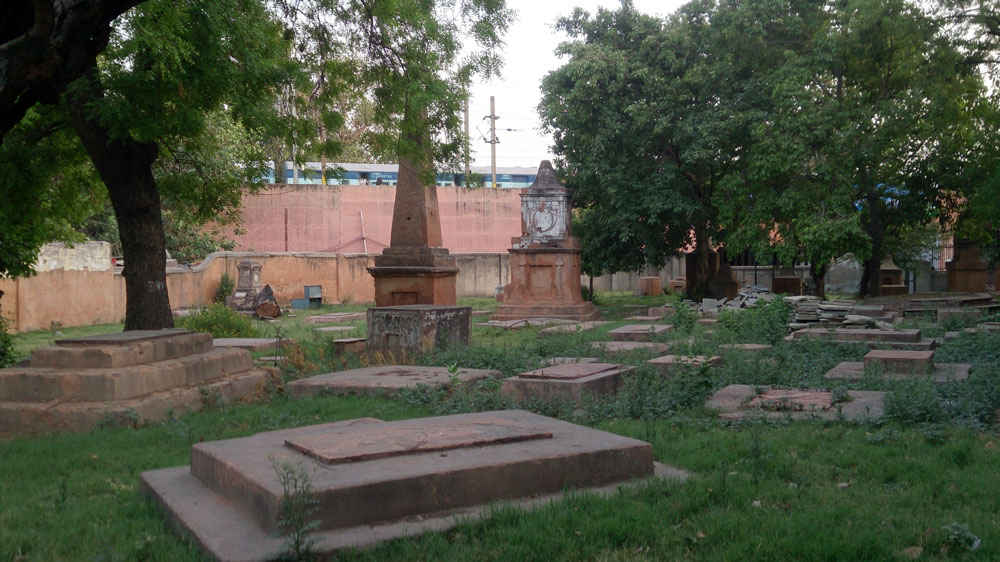 There’s a certain kind of thrill and excitement one gets out of visiting a historical place but there’s a whole different rush one experiences when that historical place is an ancient Christian burial ground. The Lothian Cemetery is one such landmark, which, even after being protected under the Ancient Monument Preservation Act, remains solely unrecognized. A graveyard visit by those who have lost loved ones is usually an emotional one. A visit to the Lothian Cemetery, however, will definitely invoke certain other mixed emotions in you as well. To feel the full impact of these emotions we decided to pay a visit to the old burial ground one evening. 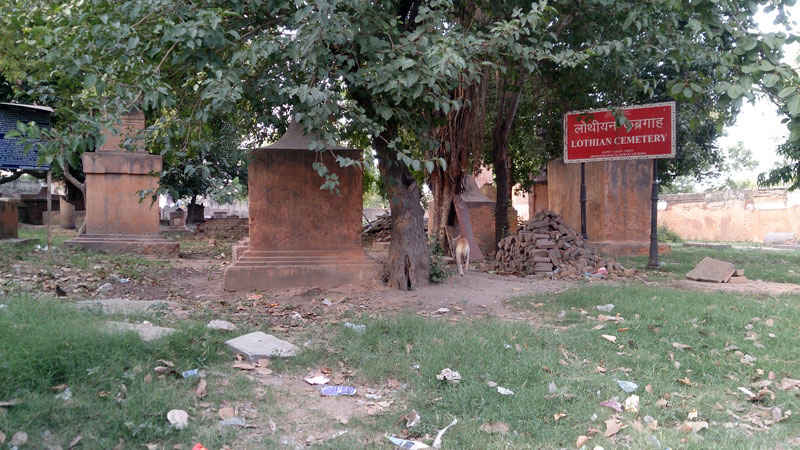 The first hurdle you might face, should you decide to go to the cemetery, is actually finding the exact location of the cemetery, and not any paranormal activity, as one might think (or hope). One quick Google search and you’ll come to know that the Lothian Cemetery is situated on the Lothian road (coincidence? we think not!) and is very near to the Kashmere Gate General Post Office.

The tricky part, as we found out while roaming up and down the Lothian road is to locate the entrance to the cemetery. The autowallahs and rickshawallas too weren’t of much help, as they were generally confused upon being asked the location of a graveyard, so late in the evening.

One old man, however, told us where the kabristan was, pointing at a dark corner where the walls seemed to disappear. We found the gate, a formidable iron structure of over 10 feet looming above us, situated at the corner of the wall which curved towards an even shadier alley. The land beneath the gate was sloping downwards, creating a gap between the ground and the gate and making it possible for us to crawl beneath it.

A Step Back Into Time 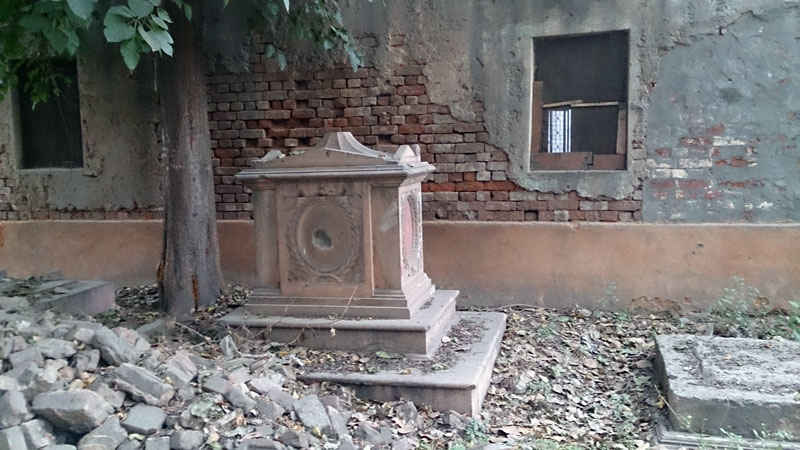 This cemetery might just be the place for you to visit if it’s thrill and adventure you seek. This place has all the elements you need to cook up a spine-chilling experience, right from the place’s uncanny serenity to the grim shadows cast off by the trees onto the graves, enveloping the cemetery in darkness.

During daytime, however, the cemetery presents a completely different picture. With no guard in sight, the way into the “protected” cemetery is again from under the gate and not through it. Illuminated by the rays of the sun, the graveyard looked relatively welcoming by the day, with its residents peaceful and undisturbed. 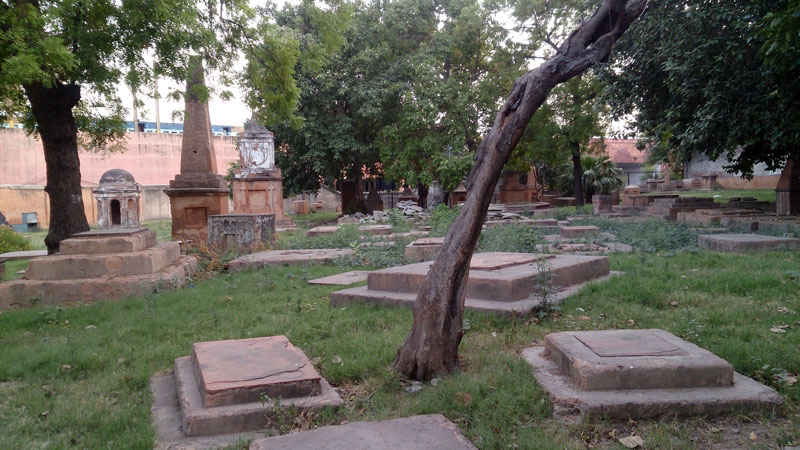 Sadly, the same could not be said about the graves, as there were multiple graves and tombstones tumbled over and in more than one piece. The people buried here were mostly, if not all, from the 19th century. The tombstones read about all kinds of people, from soldiers to shopkeepers, with the cemetery being the resting place for old men and infants alike.

A number of unmarked graves also add to the enigma of the place. While the tombstones, as they generally are, are made of marble, the graves here are made of red bricks and cement.

Respect for the dead comes naturally when you’re in their midst, but looking beyond that you can’t fail to appreciate the architectural beauty which many of the graves reflect. Carved and aesthetically shaped, some of the graves here are remarkably beautiful, suggesting perhaps that there’s a certain beauty in death.

A Ghost of a Chance 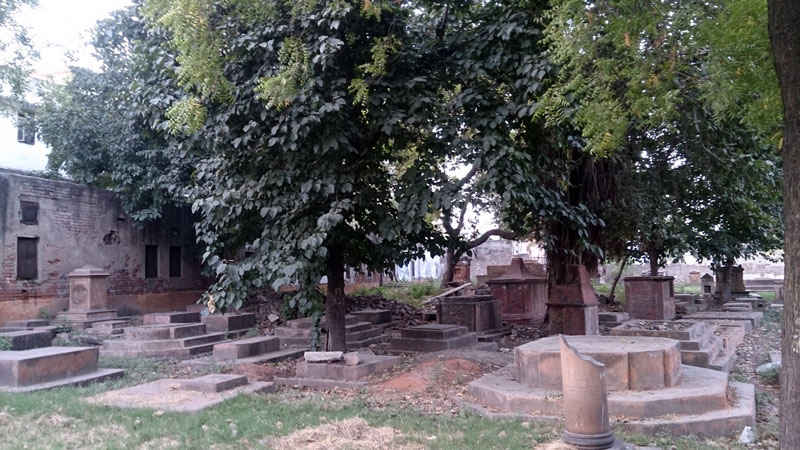 Hoping to discover more about the place, we decided to talk to the people around and see if there were any interesting folk stories doing the rounds. The alley which ran along the side wall of the cemetery led into a small ghetto, much like many other such the inevitable offshoots of urbanization.

You would be surprised and rather disappointed to see how indifferent the people there were to the fact that there was an ancient Christian burial ground right next to their place of dwelling. Indifferent, uninterested and a general lack of compassion summed up how the people around felt for this cemetery, which now unfortunately seems to be lost in time.

As it turned out, there were no paranormal stories associated with the cemetery, no wailing ghost perched on top of the peepal tree, no wandering spirit in quest of unfulfilled revenge. It was disheartening to see a place capable of sending shivers down the spine of any normal person being held as something as trivial as just another piece of land for the people who lived there.

With time taking its inevitable toll on the Lothian Cemetery, it definitely looks to be on the verge of total abandonment, if not total destruction, with even the people around it merely acknowledging its existence and not savouring in the mystical aura surrounding it.