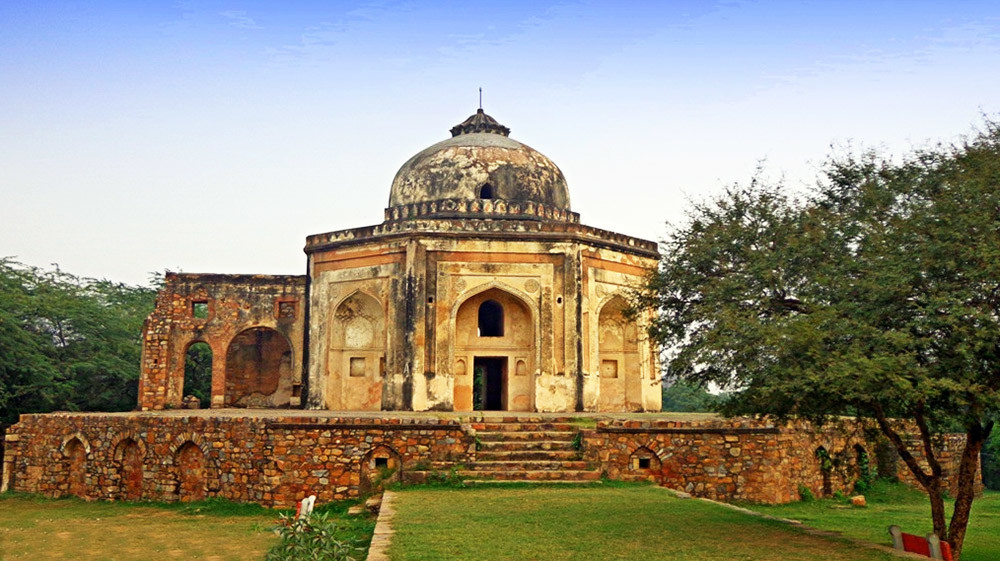 The Quiet Son Of Akbar's Wet Nurse, Quli Khan's Tomb Is As Unostentatious As The Man

Maham Anga, the wet nurse of the great Emperor Akbar, administrator par excellence, early feminist and shrewd political advisor, had two sons and Adam Khan, the younger, occupied an important place in her heart. She has been enshrined in popular culture as an ambitious mother who manipulated the unsuspecting Akbar to pave the way to the throne for her own favourite son. Now, both mother and son rest in peace, buried side by side, in the magnificent labyrinthine domed mausoleum at the heart of present day Mehrauli.

Her other son Quli Khan, however, is not every historian’s favourite. Living all his life under the shadow of his younger brother’s vocal, vituperative politics and his mother’s single-minded ambition for only one of her sons, Quli Khan was never extraordinarily prolific while he lived. Content with ruling quietly and peacefully over his Jagirs, paying gracious annual tributes to the Emperor, being the silent pillar to his grieving mother after the brutal death of Adam Khan, Quli Khan has escaped historys notice. His handsome mausoleum, tucked away in the dense forests of Mehrauli, the drunkards’ haven, is the only testimony to his existence easily available.

Getting To The Maqbara 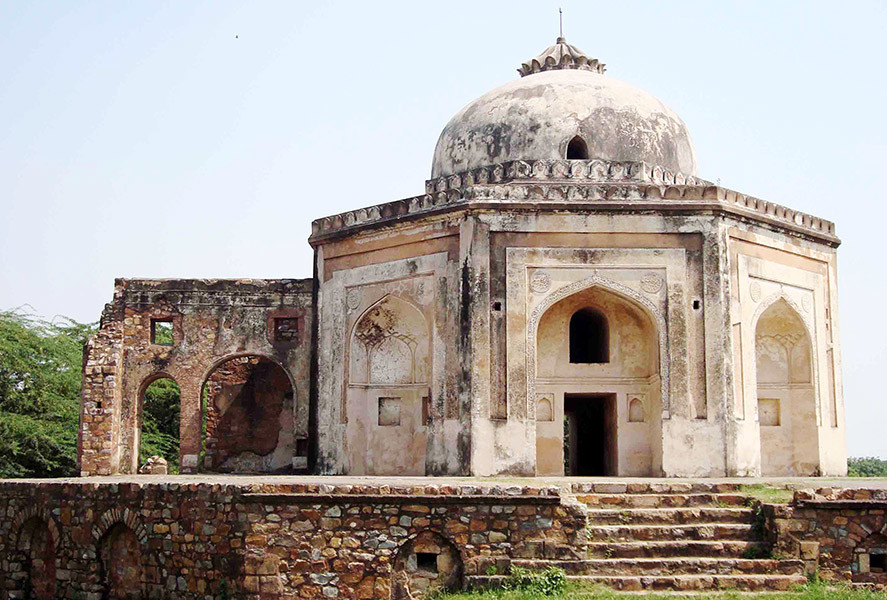 Enshrined as the Mehrauli Archaeological Park, history awaits you here but you have to approach through a narrow, brick-lined path that might just get lost in case you stop looking carefully. All around are dense forests and there are no signboards around to tell you that you have, in fact, entered a place of vivid historical significance. The locals will be both helpful and suspicious at your going into a dense forest.

On your way, you encounter three unmarked tombs, and the elegant Rajon Ki Baoli. Continue your downward trek, avoid eye-contact with the drunkards laughing loudly to draw your attention and make small talk with the locals. One of whom will point out with a titter, the grand waste the park is. He points out that there are no trees, only wasteful shrubberies planted by the government that look green, grow quick, but solve no purpose as they die away just as fast.

As you reach your destination, however, you feel overawed by the structure that sprawls proudly before you. You envision its erstwhile grandeur. A series of very steep, half-broken steps will lead you to the dome. The wind catches hold of you. At some height now, you can look around and for a moment you are transported to some Virgilian idyll.

Lush greenery, the sky overcast with clouds threatening to burst, the ruins of ancient grandeur, the din of distant laughter, the lavish bare lawn with overgrown grass, the distant call for the afternoon namaaz, the evidences of mortality all around opposed to the very strength of the stone you are standing upon, make a chill run down your spine. Inspired, you enter the domed pavilion, and gasp at its beauty. 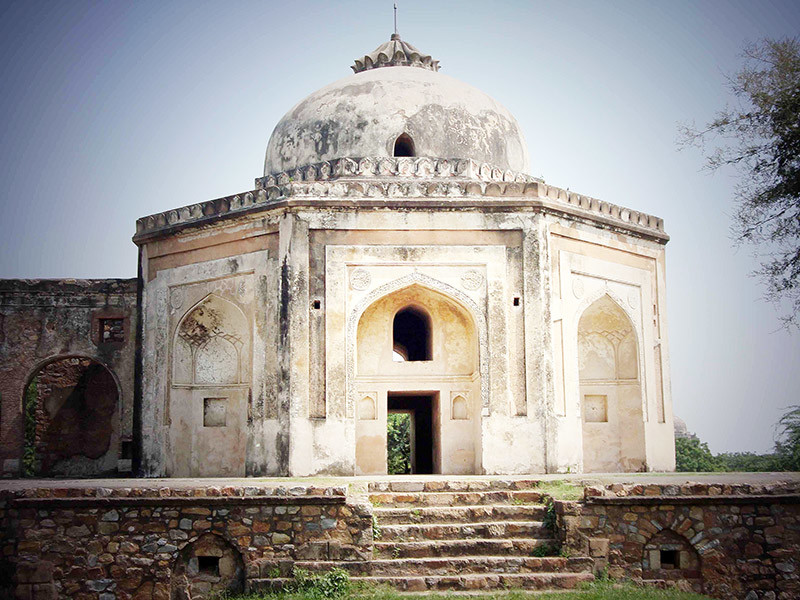 Adorned in a dark misty blue, a daring red and soothing green, the exquisite stone inlay covers the walls and pillars. Not much of it remains now; you witness only a vestige of the regal beauty that it had once been. But at places such as these, your imagination needs must run on.

There are elaborate floral designs not only in inlay, but on stone pastiche, on the ceilings. There is a small unobtrusive staircase leading to the four handsome jharokhas. The ceiling also has distinct marks of having once borne an ornate chandelier.

The tiled entrance of a luminous yellow, the elegant arched niches and broad recesses, give such a vision of splendour that you cannot help but make conjectures about the very personality of Quli Khan himself. The man whose story is not only forgotten but even barely chronicled; his tastes, his connoisseurship and his death. It’s a feeling one gets in a tomb, of being in communion with the dead; of visiting, of paying homage, of bemoaning the end of a life and the selective scalpel of historians.

The place obviously arrests you, precisely because of the aura of anonymity, of seclusion. You know your camera can capture just the stone edifice, you don’t feel like adding artificial colour to it. You leave the picture as it is, as absolute and unmoved as death itself. But in your mind, you let the grass sway, the tiles dance, the arches broaden and the colours swim. Come swing by to witness this forgotten architectural relic!