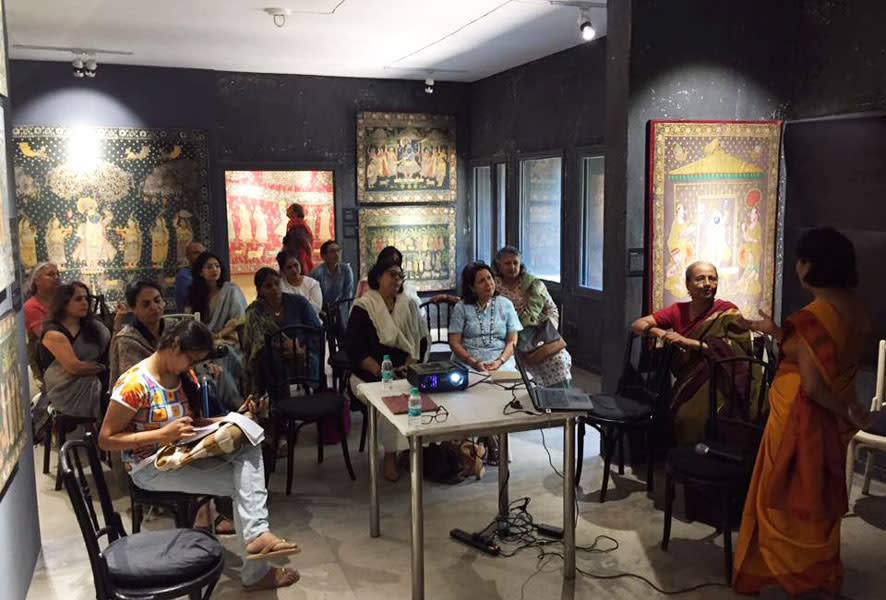 When it comes to classical dance forms, a Kathakali dance performer’s makeup and expressions always hold one’s fascination. You may have witnessed the dance form a number of times; however, to actually see the process of the mask preparation for the dance, do visit the Srinivas Malliah Memorial Theatre Crafts Museum!

Named after Ullal Srinivas Mallya - the benefactor of rural arts, this museum is a unique collection of arts and crafts from ancient India. Whether it’s a Kathakali costume or the Bommalattam puppets, the museum showcases all. Situated on Deen Dayal Upadhayay Marg, the museum is built as a double-storey structure. As you enter, a lawn bearing a pathway leads you to the building.

Standing tall in off-white, the museum building comprises curved structures operating as entrances to the museum compound. Large curved window panes painted in white illuminate the halls with an apt amount of sunlight.

The collection starts with the ground floor hall housing an array of costumes, some even dating back to the 12th century. The museum volunteers have continuously excavated different regions to keep adding to the collection. The whole epic of Ramayana comes alive with the theatrical display of the wooden mask of gods used during Shahi Jatra performed to unfold various chapters of Ramayana. The beeswax, tamarind seeds and mica displayed creatively bound in a glass structure, reconstruct the process of making Ravana’s crown - followed as a tradition in South India.

Small clay figurines detailing the Goddess Tusu associated with the Tusu Parab dance form of West Bengal also finds a place in the museum. Having flipped through Natya Shastra by Bharata Muni, the ornaments and costumes relate to Shiva’s cosmic dance form.

The upper section of the museum consists of puppets from various regions. The puppets are not just simply enclosed in a glass structure or stuck to a wall. Certain puppets like Kundehi puppets, the traditional string marionettes from Orissa are placed on a cemented structure with sketchy lines in white ink forming the backdrop. The Tholu Bommalata, shadow puppets, popular in Andhra Pradesh (AP), are illuminated aptly to illustrate the art of puppetry displayed with the plain leather figures pressed against a plain screen to enact the story.

The Pavakoothu puppets from Kerala display a lesser known fact about Kathakali. The glove puppets from Kerala, preserved by the museum, are dressed identical to that of a Kathakali dancer, the only difference being that a puppeteer actually operates the expressions. At one end of the museum is a workshop hosting skilled craftsman engaged in the task of recreating the masks and ornaments related to ancient theatre forms.

The museum is open for admission from 10 AM - 5 PM on all days except Sundays and national holidays. The site can be reached by bus, auto rickshaw, taxi service and metro. The nearest metro station is Pragati Maidan, from where you can take a rickshaw to reach 5, Deen Dayal Upadhayay Marg.

If you’re an admirer of this beautiful and expressive art form, then it’d be a sin to miss out on this museum!