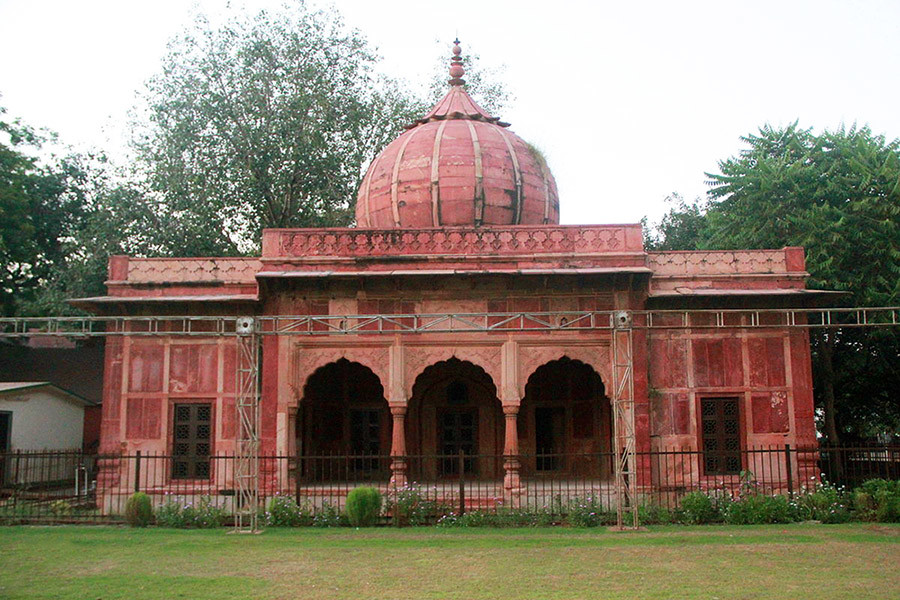 The Lal Bangla, the name given to a group of two mausoleums, lies locked, barricaded, and overshadowed by glossy posters within the premises of the elite Delhi Golf Club. The extensive use of red and yellow sandstone for its construction may be the reason for the name of the mausoleums. However, there is absolutely no way one can enter or even come close to the building.

Entry to the Golf Club is restricted to members only, but you can try to talk your way through and succeed in taking a brisk stroll around the expansive greens, spotting a few more such monuments, mostly unnamed, unmarked and untended to, falling haplessly prey to vicious vines and creepers. 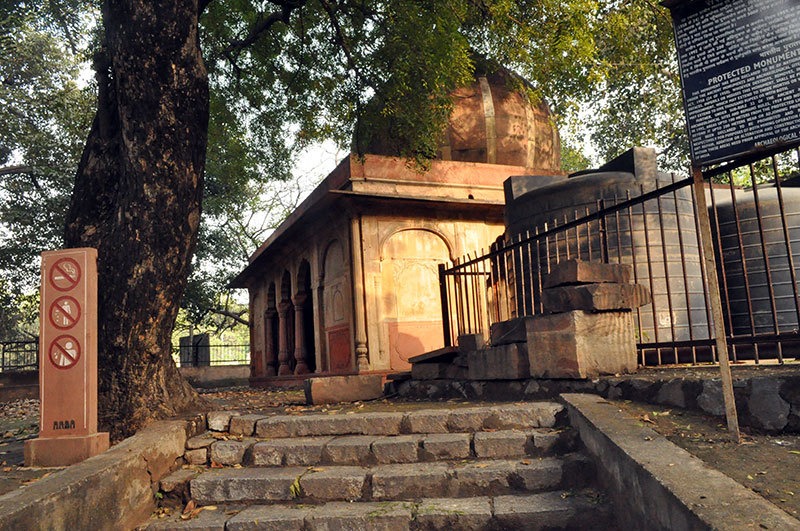 Cautiously, you interrupt the swaggering golfers immersed in their game and ask them what they know about the various monuments there. A few of them are happy to show you around, once you explain to them the purpose of your visit. But they have no ready answers to your enquiries. They say that the Club is always bustling with activity and the monuments are mostly padlocked, so they often escape the notice of the Club members. 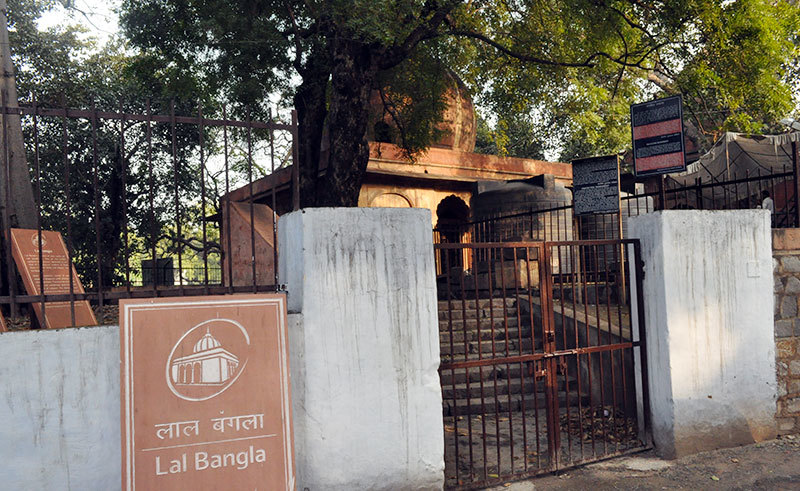 This is the most prominent monument among the other ten that dot the golf greens. It was built back in 1779-80. The domed chhatris and the presence of a central pavilion clearly indicates late Mughal architecture.

There is some debate about who lies buried there. Most historical findings concur that the tomb belongs to Begum Jaan, daughter of Emperor Shah Alam The Second and his mother Nawab Zinat Mahal Sahiba, also known as Lal Kunwar, which also may have given the monument its name. Some others believe that the tomb may belong to Lal Kunwar, the wife of Aurangzeb’s son Jahandar Shah. Built on a platform of red sandstone, the adjoining mausoleum has tombs belonging to the family of Akbar The Second. 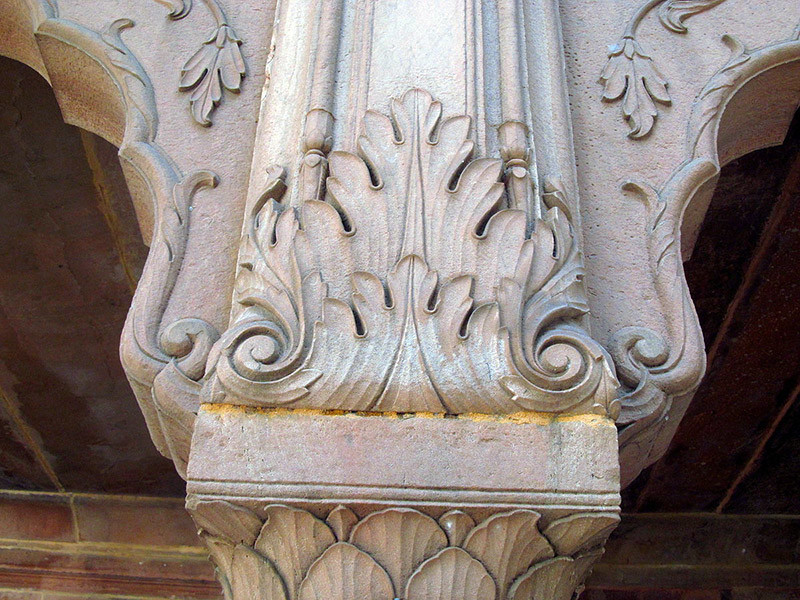 Entry to the Lal Bangla, with signboards proclaiming it to be a Protected Monument lie outside, near an entry gate of the Golf Club, but separated from its premises. If there were any visitors to this monument, there is no way they could trespass into the Club if the main gate of Lal Bangla remains open, because the boundary walls are well-defined. So you cannot help but wonder why it is completely closed to public. There is no sign of ongoing renovation, or even a security guard stationed there.

You can only peep at it from over the tent under which elaborate morning snacks are generally being prepared for the members, or through the iron fencing where the chefs’ coats hang. The view of this piece of history is completely marred and blocked by vegetable carts, buckets of alcohol and huge pans of food being cooked outside.

The Tomb Lying Within 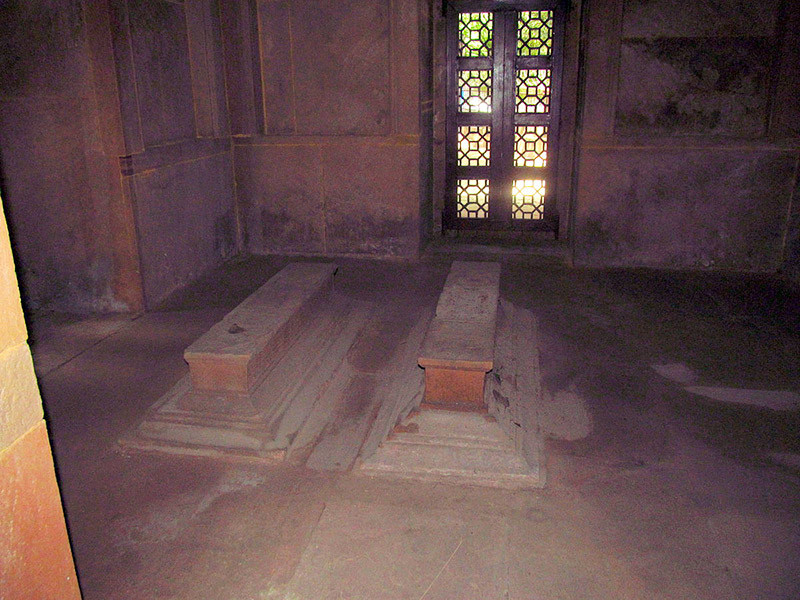 As you stroll further, you come upon the dilapidated tomb of Syed Abid, an associate of Khan Dauran Khan, a leading soldier in the army of Shah Jahan. The plaque outside the humble monument is grimy and cracked beyond legibility. The tomb itself is being used as a rough store-room of sorts, with old posters of Club events, broken lights and camera stands dumped in there.

At one point of time, these monuments were significant enough to be mentioned in Syed Ahmed Khan’s magnum opus ‘Athar-us-sanadeed’. You begin to wonder about the different ways in which individuals and nations relate to history and use it. Is it a thing to be preserved and learnt from or is it a thing to be overwritten, to create new narratives detached from the shackles of the past? Is it a thing to be viewed and admired as temporally distant or is it a part of our very identity, a part of a process that culminates into the present moment? 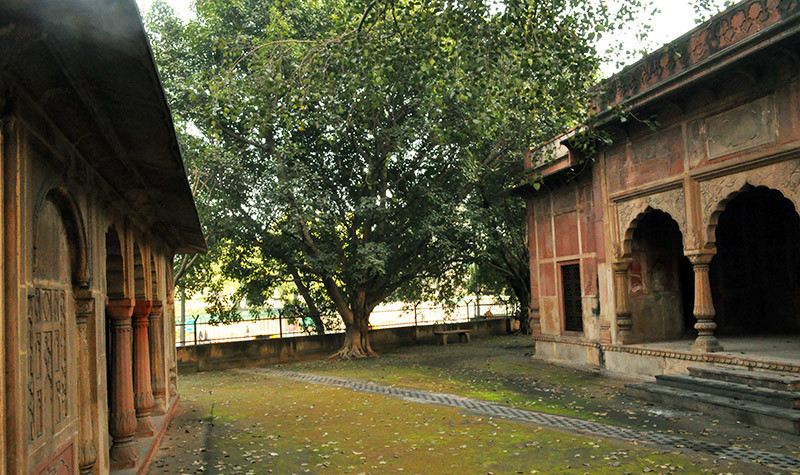 At the Delhi Golf Club, the historical monuments are shorn of their personal histories and stand no more as representatives of a cultural, archaeological tradition but are used as props, as backdrops to the activities of the modern elite, in the interstices of contemporary lifestyles, which is saddening to witness to say the least!