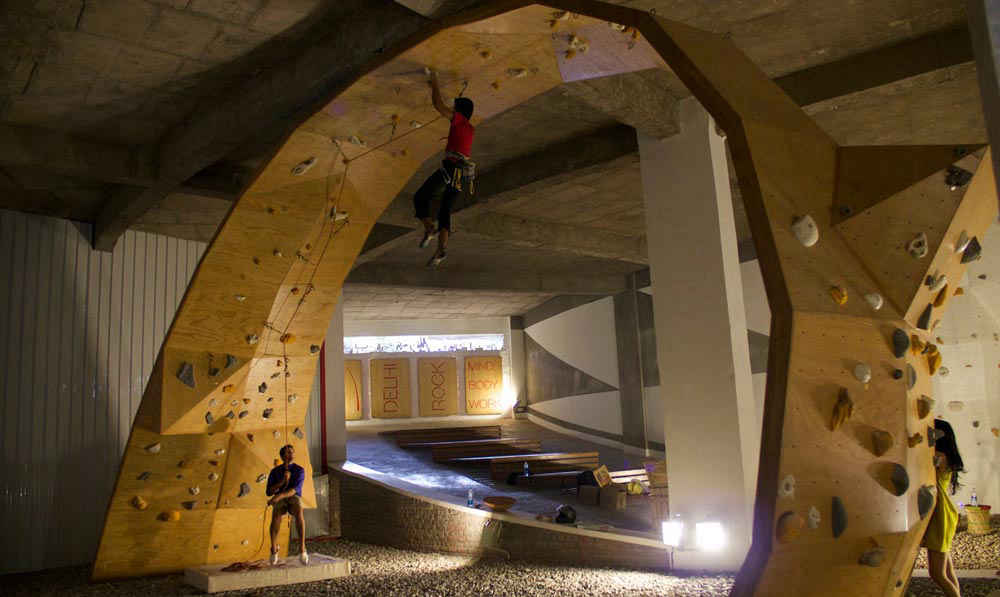 Craving Some Adventure? Check Out Delhi Rock for Some Rock Climbing and Aerial Thrills

There are very few times in life when you feel personally challenged by a single act, feel an uncontrollable rush of adrenaline, as the best (or worst) of your personality comes gushing to the surface and you’re laid bare to yourself. This is what happened with us over a seemingly incidental weekend at Delhi Rock, the indoor rock climbing gym in GK II, when we were faced with some of our most latent fears and managed to gouge them out and exorcise them.

Rock climbing, if we’d call it anything at all, after our session with gym founder, expert mountaineer Anuraag Tiwari himself, would be soul-cleansing. We’d just as easily pen our experiences down as replay them in our minds over and again for personal gratification—before running to get our pair of climbing shoes and having another go at it! 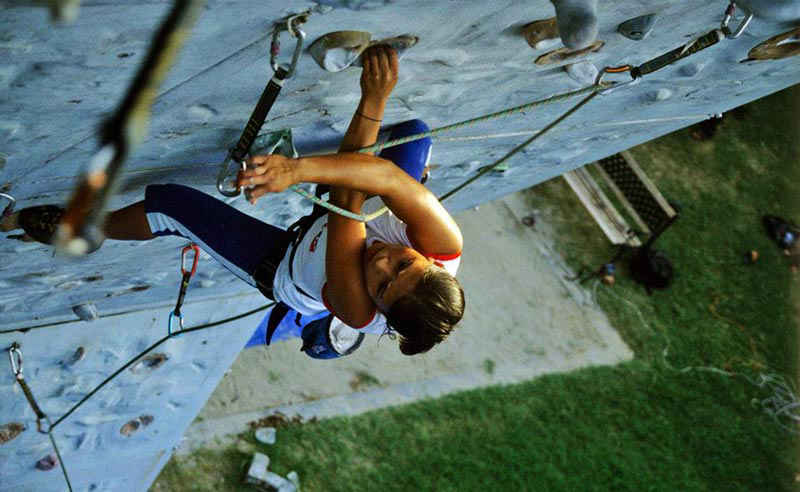 When we walked into the large colosseum-like space on a Saturday afternoon, we expected it to be like most gyms - quiet, uneventful, still slumbering after a fast-paced week. We couldn’t have been more off-centre.

The sight of large groups of families (almost all of them with kids in tow), both Indian and non-Indian greeted us, each having repeated gos at large rock faces, shimmying up and down ropes and holding onto harnesses (read: we were already blown away).

Rock climbing expert Anuraag quickly brought us down to ground zero. Having spent about 8 years abroad (in Seattle, USA), he recounted his experiences of mountaineering and rock climbing abroad.

He narrated how he’d been enlivened enough to start a volunteer group in Delhi when he came back to the city, punctuating his own stories with that of Indian mountaineering history. Lesser known facts were relayed to us—of how the Stephens’ Climbing Club was really where it all began in the 70’s, of how Delhi itself could truly be called the city where the birth of mountaineering took place. “The fact that it’s geographically so close to places like Manali and Dharamshala makes the city perfect for such training”, he explained, going on also to warn us of the hazards involved in the sport.

Before we could eagerly throw more questions at him, however, the inevitable happened; he’d asked us, before we could brace ourselves for a session of rock climbing under his tutelage!

Scaling One’s Way to the Top 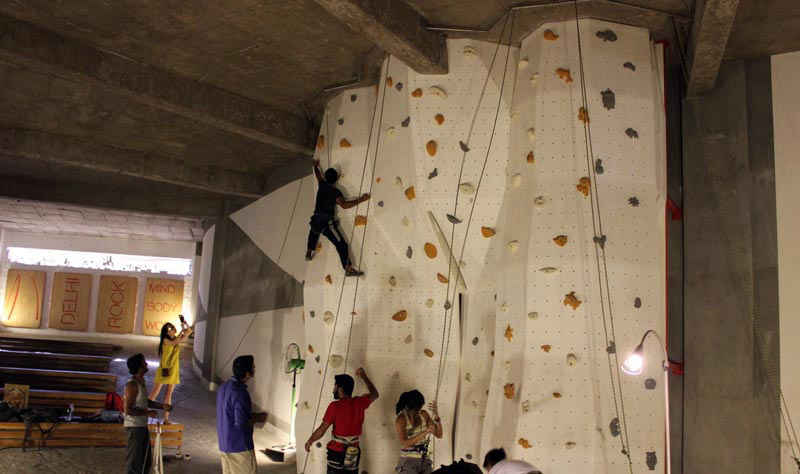 Anuraag put us through the paces quite literally. With no more than a twinkle in his eye, yet with the dead-seriousness of an expert on the matter, he ordered us to do a warm-up of twenty runs around a raised ramp in the gym. Not ones to shirk, we set to it at once and were quite pleased to note we weren’t all that out of shape when we managed to accomplish that feat with only some breath lost. This was only the purported easy part though, as Anuraag next—before we knew it—had us in climbing gear: proper shoes, harnesses around our waist and thighs and was giving us a stream of information to which we listened eagerly.

We learned that rock climbing instructions were very important in the outdoors as out there, in the open what kept one alive was the partnership between climber and belay. One trusted the other implicitly and made sure to check all gear beforehand;

Such checking is important, he made sure we knew—“you could be climbing without a hitch for a 1000 days, and then on your 1001st day, you could make a mistake and get yourself killed”.

This wasn’t the outdoors but it sure was mighty good practice for the real thing! We were made to climb at least three different rock faces (each with varying levels of difficulty) and our happiness knew no bounds when we were pronounced “natural” climbers by the expert himself. “You can see so much of a person’s personality reflected in the way they approach climbing”, he smiled.

“Some get daunted by the challenge or feel judged if they can’t make it to the top. Others come back feeling accomplished”. Our determination and ability to scale our way to the top had won full marks from him!

A Sense of Personal Achievement 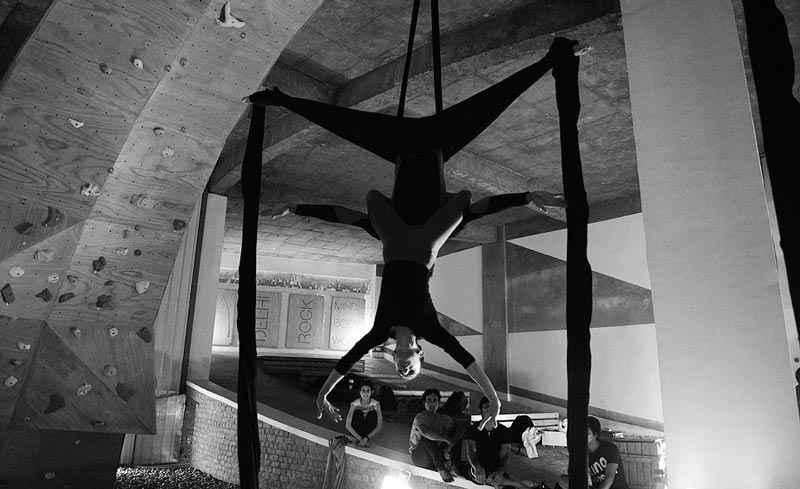 We were by this point naturally brimming with more questions, fuelled in no mean part by our own glow of achievement. Climbing seemed to be truly addictive, we enthused.

It was, he explained, especially the way it allowed people to solve problems. There are some people who truly enjoy problem-solving—such as kids, he opined. The latter were better able to grasp a solution, better equipped to remember what they were taught; adults came with preconceived notions and adult fears that were much more difficult for them to surmount.

Anuraag also waxed eloquently on the idea of Delhi Rock as a fun, alternative form of fitness activity. People often grew up with stereotypes, he claimed; they might have been called certain names when they were kids which made them feel they were unfit.

Rock climbing offers everyone a chance to thwart such stereotypes about themselves and try out an activity that don’t have one so worried about losing calories. Mental reservations clearly flow out the window.

He bordered on the cautious, however, when we asked him about his plans of expansion, to reach out to more people. He wasn’t looking to campaign aggressively, he assured us; climbing is an inherently dangerous activity, of this he was aware and he didn’t want to jeopardize the good the gym could do by rushing matters. At the same time, the equipment he sourced for his gym was of top-notch quality as he displayed to us. The Carabiners and Belay devices and ropes were brought from outside to reduce chances of any defect. 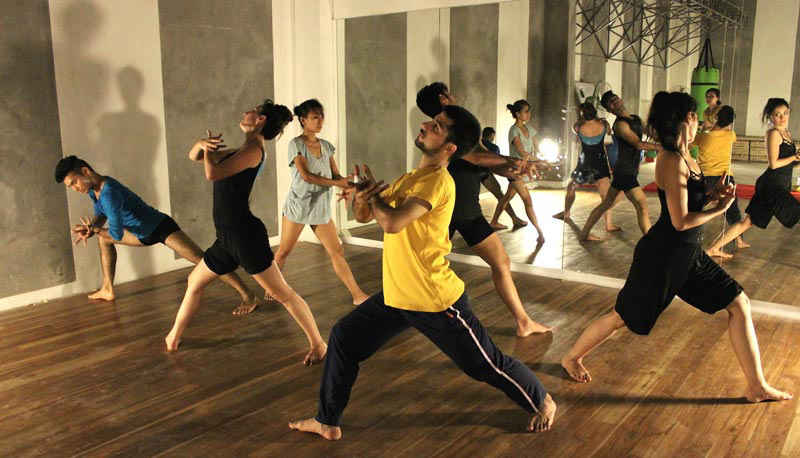 Delhi Rock had also several other fun elements where we found children practising/ gambolling their hearts out; this was the aerial acts section.

Aerial acts have also been incorporated into the doings at the gym, which could be seen as a part of the larger climbing routine/ training. One of the most interesting observations Anuraag let us in on, was his pleasure to see how the gym attracted a large number of women. It was as if the sport acted as a sort of unifier, doing away with gender prejudices—indeed we spotted more women at our session than we did men! “The aesthetics of this place seem to appeal to women”, he mused, added that this was an unconscious thing. “Perhaps it’s the artsy vibe here. Everyone enjoys it despite their political, social affiliations”.

We were glad to let Anuraag have the last word on that one, and left with hopes that the place and the sport only find more and more takers, as larger sections of the population find newer ways to grapple with their problems and put them to rest.

Lifetime fans have been found in us, for sure!