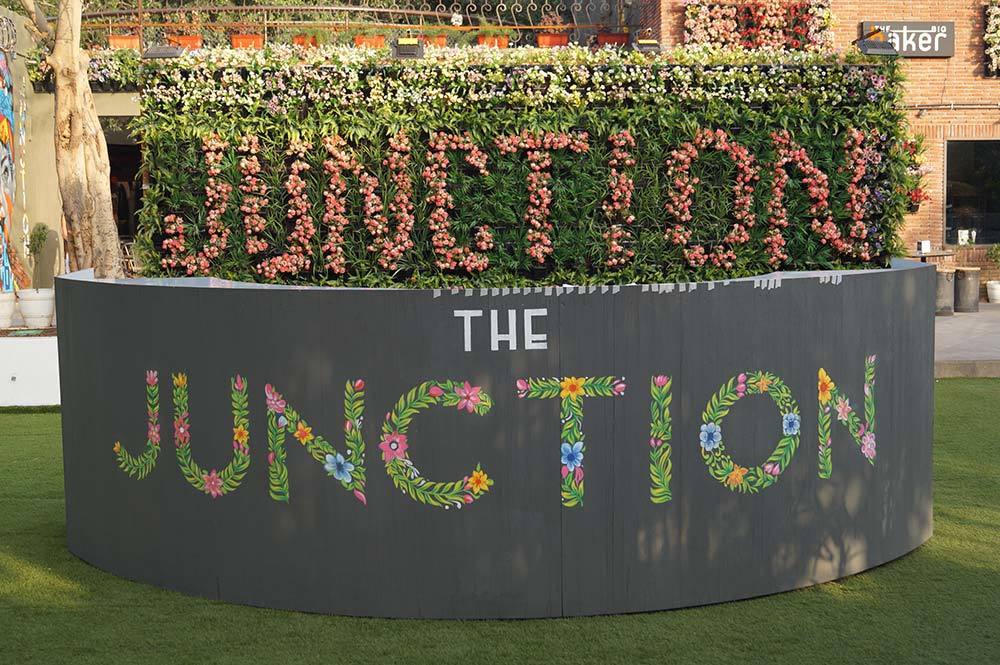 A Ginormous Lawn & Assorted Genres Of Cuisines Under One Roof, The Junction Left Us Happy & Full!

Just when we thought that we were done with our visits to Hauz Khaas, The Junction just gave us a whole new reason to come right back! This place keeps on surprising us and this time it has left us agape. Rightly doing justice to its name, a new place going by the name of The Junction has opened its doors for its patrons, bringing different genres of food under one roof. 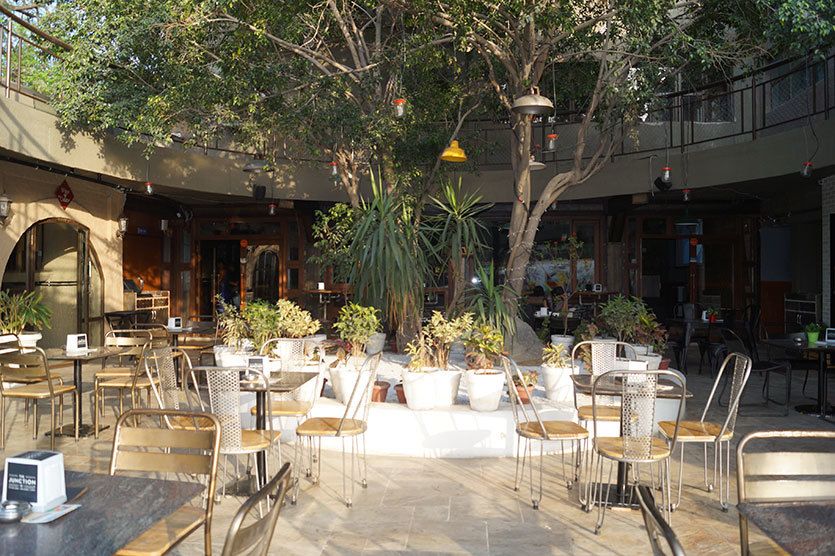 Located on a corner plot of the circumference of the Hauz Khas area, The Junction welcomes its guests with an alluring and ginormous lawn. Just at the entry, one can find this place flaunting its name on a canvas of exquisite and vibrant flowers. As the name suggests, there are divergent dining hubs, all under one roof, serving under the brand name of The Junction. There’s ‘The Baker’, the patisserie, a pizzeria, a bar and an outlet of ‘Potet’, a fries-only fast food joint.

The enormous area is elegantly bifurcated among its different outlets and is a result of a beautifully laid out plan. As you enter and move ahead, you will find yourself right in front of the patisserie. 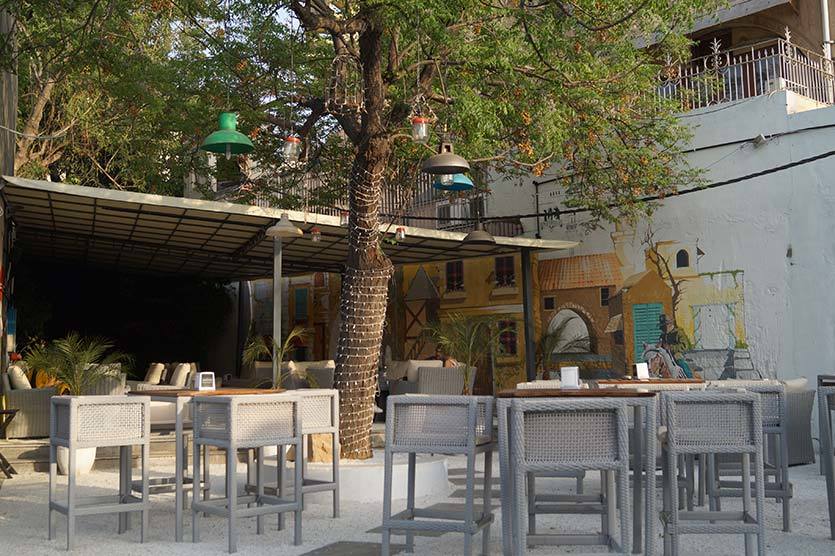 On the left, they have an open seating area which is partially covered. This part is given a garden look with white pebbles forming the ground and has long chairs and tables laid out for its customers. On the left, there’s Potet, the bar and the pizzeria and the central area between these three outlets again acts as a common outside eating area. There’s ample space in the bar, which also generally boasts a live DJ. However, Potet and the pizzeria do not house any seating. In addition, there’s a small stage where live shows take place. Impressed yet? Wait till you read on!

Stupefied and amazed by the property, we dug into the following from The Dining Room: 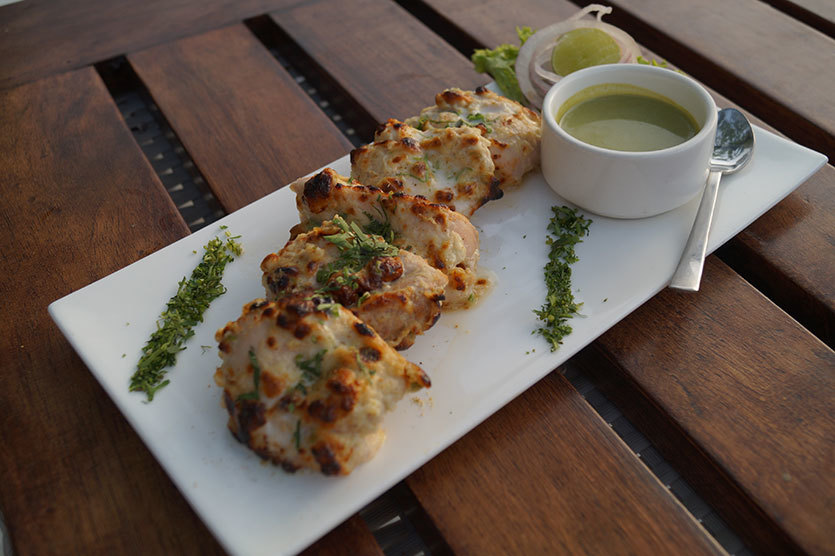 Sizeable, succulent pieces of chicken, aptly marinated and evenly cooked with deft skill in the tandoor were stirred in a white sauce made with crème and mayonnaise, and garnished with coriander before being served to us. The whiff of freshly cooked chicken left us salivating! The squishy chunks of chicken were easily dissected and by the first bite, we were in bliss. The white crème was completely absorbed by the chicken, which could be felt while munching - the taste of chicken was complemented by the essence of crème present in it. Nom nom! 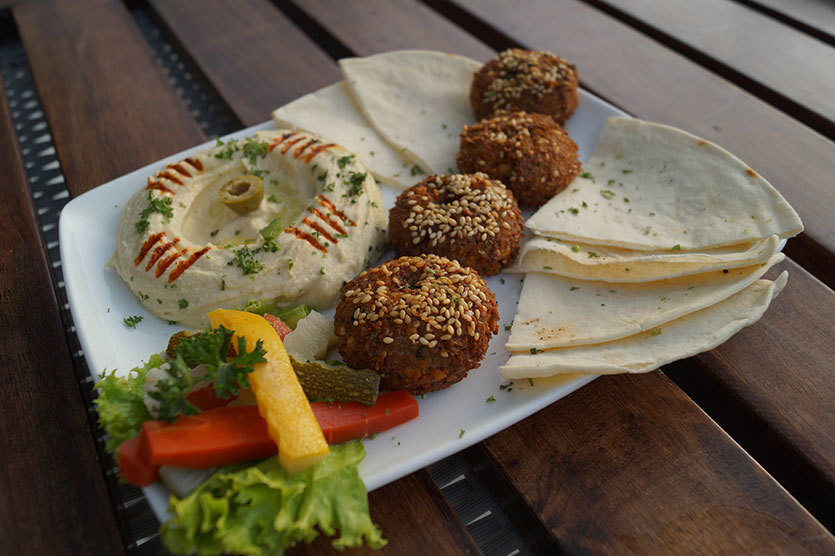 Copious masses of hummus, six sizeable portions of pita bread, prepared in-house, and four pieces of falafel cutlets served with a small portion of salad would best elucidate this dish presented to us. The hummus was the highlight of the dish, as it was prepared by the chef himself and since the presence of garlic was nicely maintained, it made the dip truly appetizing. The falafel cutlets were soft and tender from the inside, possessing perfect crispness on the outside. Considering the in-house preparation of the pita bread, it seemed fresh and nicely fermented. The vegetables were evenly boiled and nicely sautéed - a good dish indeed! 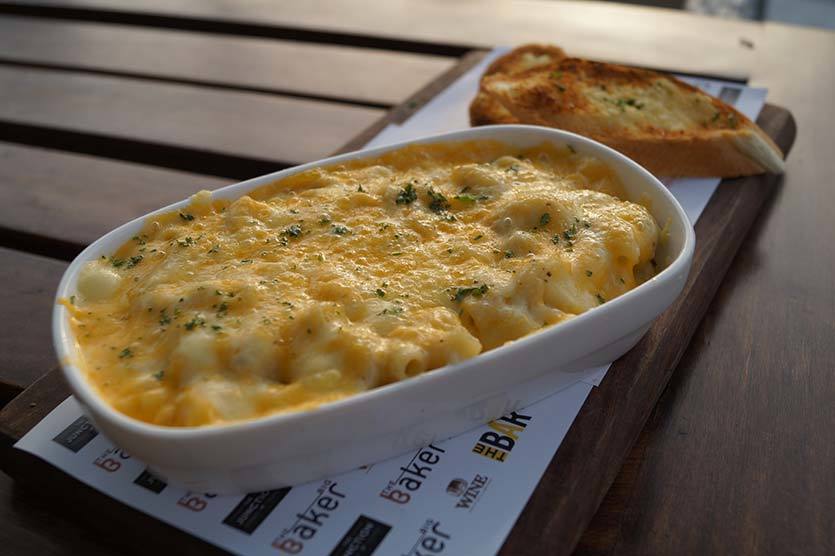 We were in love with it the moment we saw it proceeding towards us! The delicious aroma of freshly baked cheddar cheese filled our eyes with happy tears and hearts with utter joy. The pasta was evenly boiled and properly cooked and well stirred in white sauce. The spices used played a pivotal role in enriching this dish with oodles of flavour. The limited use of oregano was highly appreciated by us! The pasta was then covered with grated cheddar cheese and baked in the oven till golden-brown perfection. Served with two portions of garlic bread, it satiated us to the core! 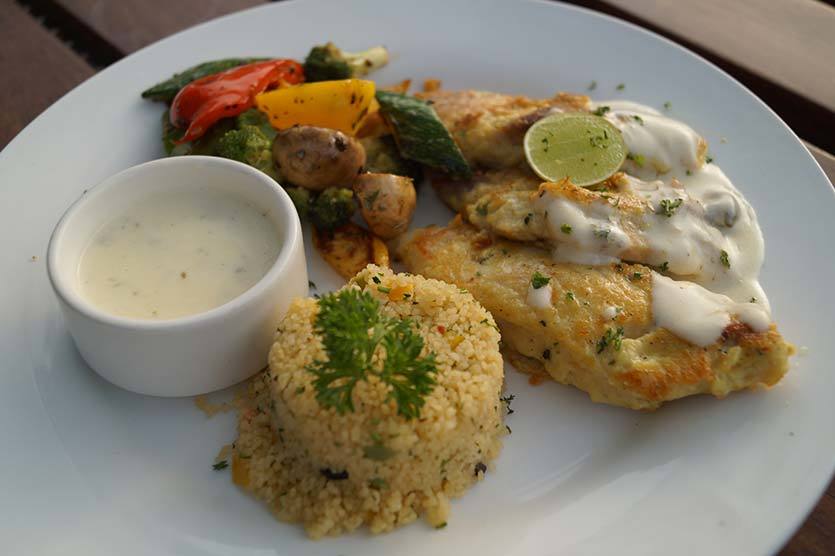 This place has made us fall in love with fish all over again! Grilled fish served on lemon coriander cous cous, served with a nice portion of sautéed veggies and lemon caper sauce would best sum up this dish. Generally while cooking fish, its character gets lost and the taste gets dismantled. However it seemed facile for the chef here to prepare such a dish with the utmost care and prowess. The tenderness and mushiness was not lost and the fish overall was amazingly cooked and evenly grilled. The vegetables were evenly boiled and nicely sautéed, making this one lip-smacking! 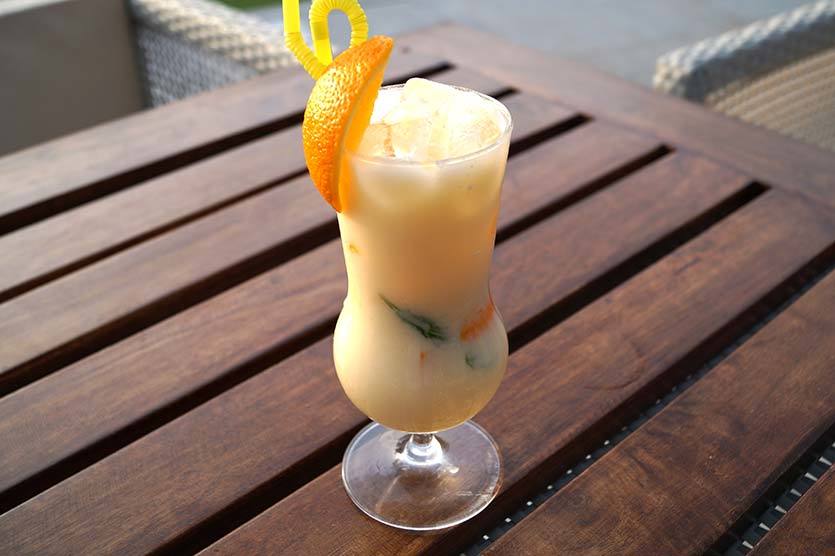 We had two drinks and as the names suggest, they were quirky enough to warrant a try! The Coco Cooler was a fine blend of fresh coconut water, coconut milk and orange juice with a hint of lime juice on the top, adding a certain tinge to the drink.

The other version was the Cucumber Cooler. Lime juice, fresh coconut water and a hint of sugar syrup when mixed, results in this drink. To add the essence of cucumber, diced pieces of the same were blended in this concoction before being served to us. The presence of cucumber made it a refreshing drink leaving us completely rejuvenated!

The ambience is the USP of this place! The dignified, sophisticated and modish atmosphere of the place, for a few moments, cuts you away from the cobwebs of the daily routine and fills in a certain level of freshness. Sitting under the open sky and savouring some of the scrumptious delicacies, one actually realizes what a cool breeze feels like. An on top of it all, they have valet parking!! (We like that smile on your face!) 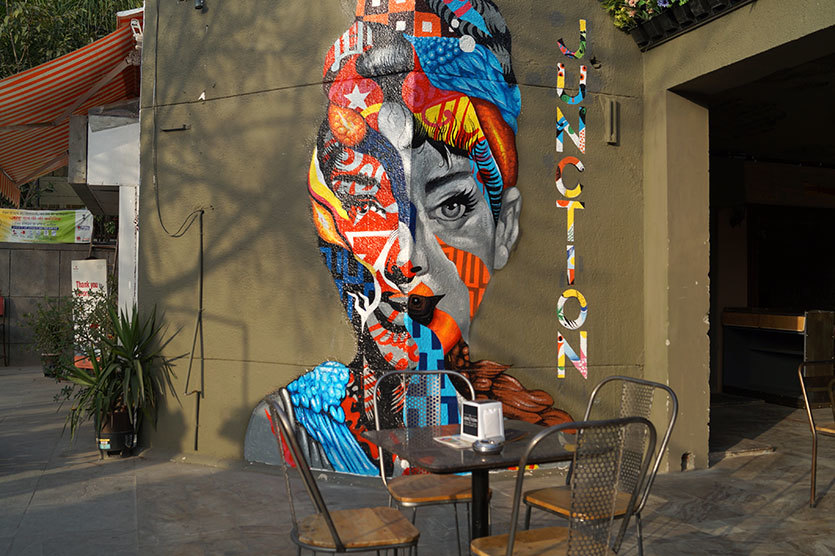 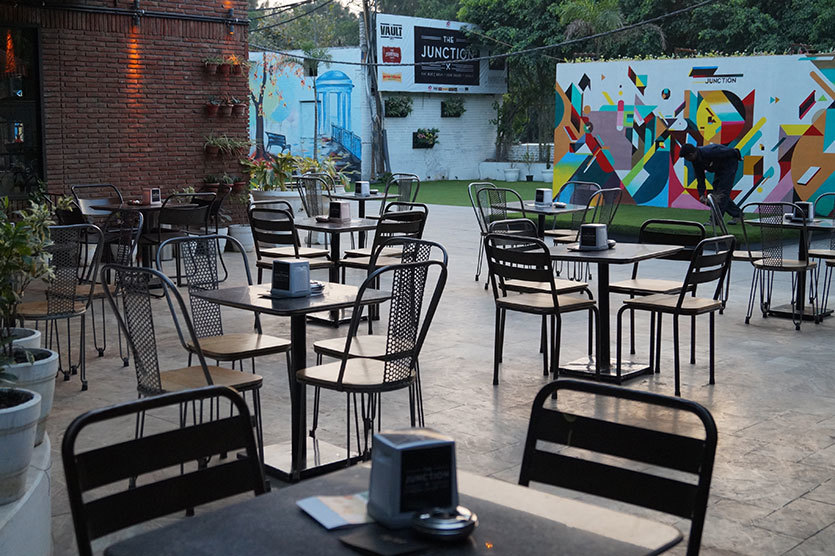 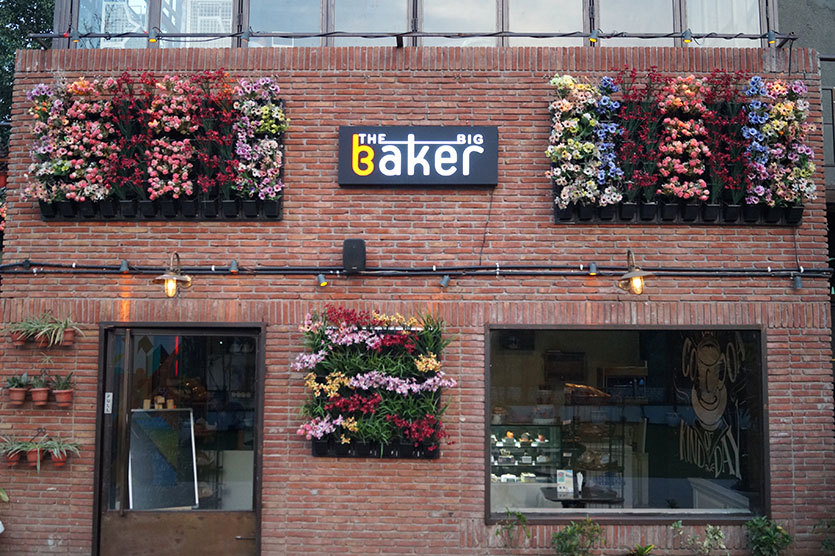 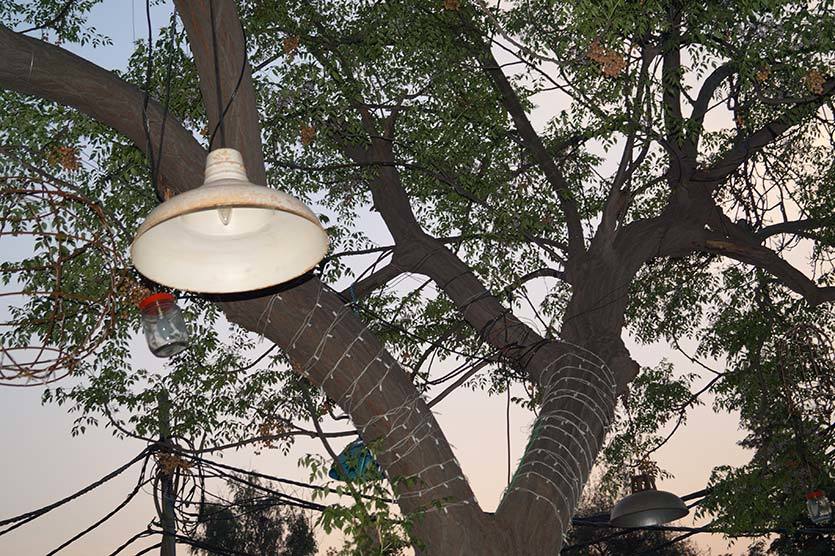 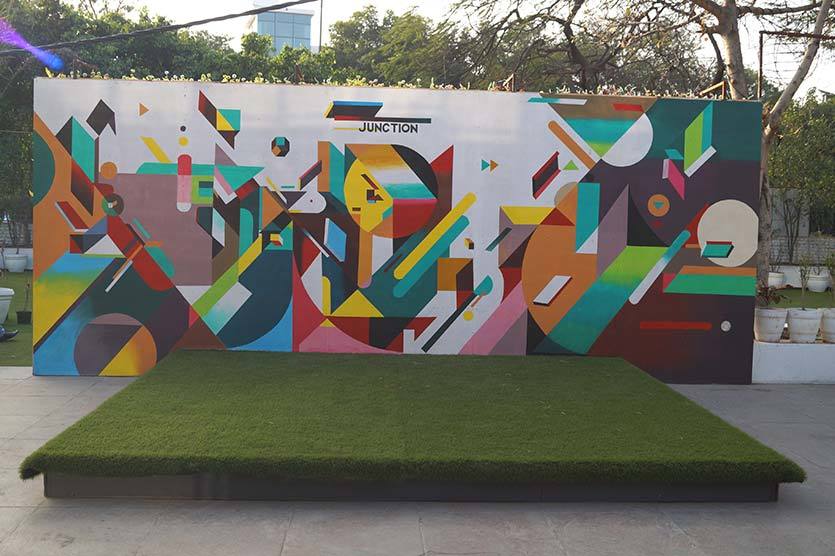 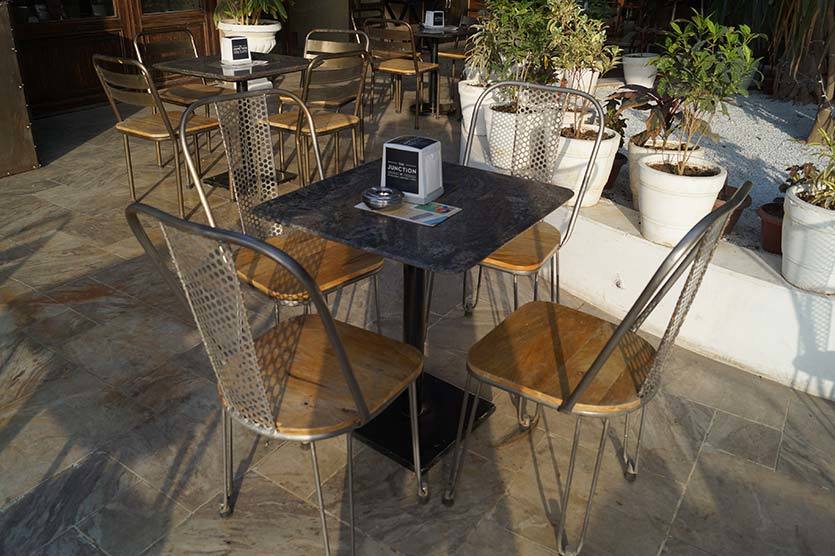