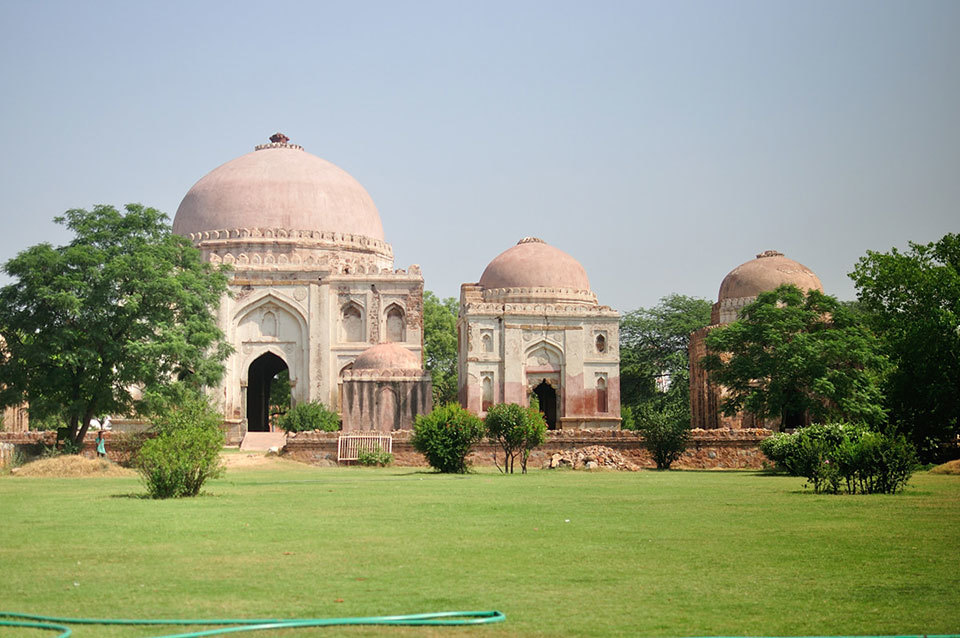 Located in what is known as the Wazirpur Gumbad Complex, stands a cluster of five tombs along with two qiblas (wall mosques), a baoli (stepwell) and a grave platform. Hidden away in the urbanized locality, the best way to reach the place is by bus, with the nearest bus stop - RK Puram NAB, being just 400 meters away.

Built during the Lodi era (1451 - 1526 AD), the place is not packed with tourists and therefore, will give you an opportunity to explore the place in peace. The exquisite medallions and ornamentation adorning the walls of the tomb will definitely leave you charmed! 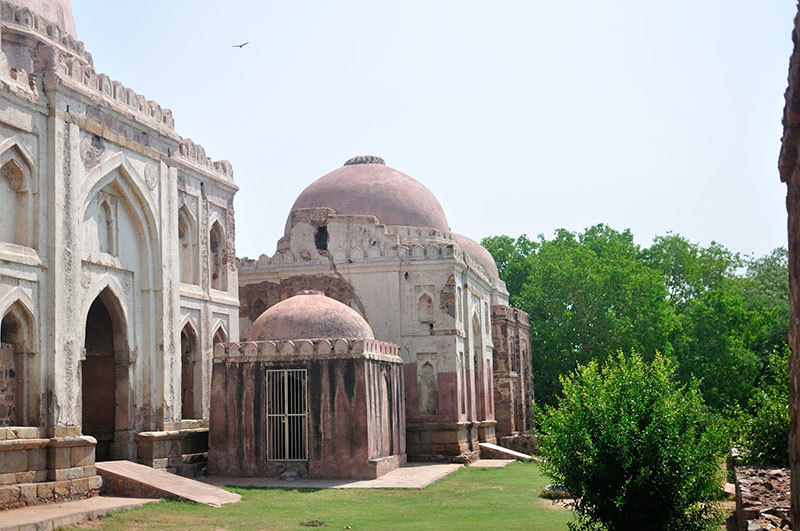 The monuments in RK Puram are probably among the least known monuments in Delhi even though some of them are quite well maintained and large enough to attract attention. In fact, it’s a bit surprising that they are in such good shape. The cluster of five tombs in Sector 5 is one of the most exciting prospects in this regard. They are so obscure that one is not exactly sure what to call them and not much is known about their history.

Some refer to them as the Wazirpur Gumbad Complex but it’s more likely to create confusion because present day Wazirpur is located far away in Northern Delhi and so we dub them as the RK Puram Gumbads to avoid confusion. 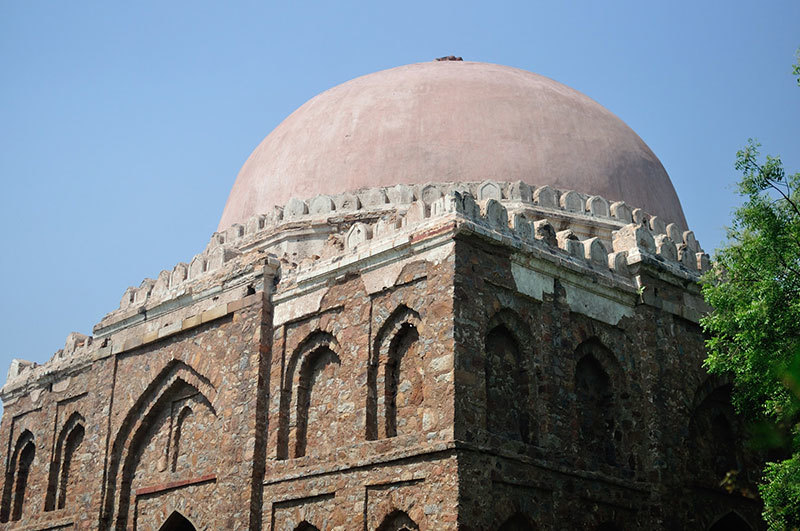 There are five tombs here situated very close to each other. From the architecture, we know that they are Lodhi era tombs from the late 15th or early 16th century, but the exact details are unknown.

The largest one has two smaller tombs on its right while there’s a very small one in front of it and another one at a slight distance on the left side. The awkward placement and clustering of these tombs is somewhat intriguing.

The central gumbad has two graves inside and interestingly, one can see flowers and incense sticks, indicating that locals worship these tombs which was really intriguing to witness! In the cluster, the first three tombs are very closely situated and display a similar structure and share a common plinth. The tomb on the right is a bit simpler in structure while the fifth on the left side is located a bit far away but is also well maintained. 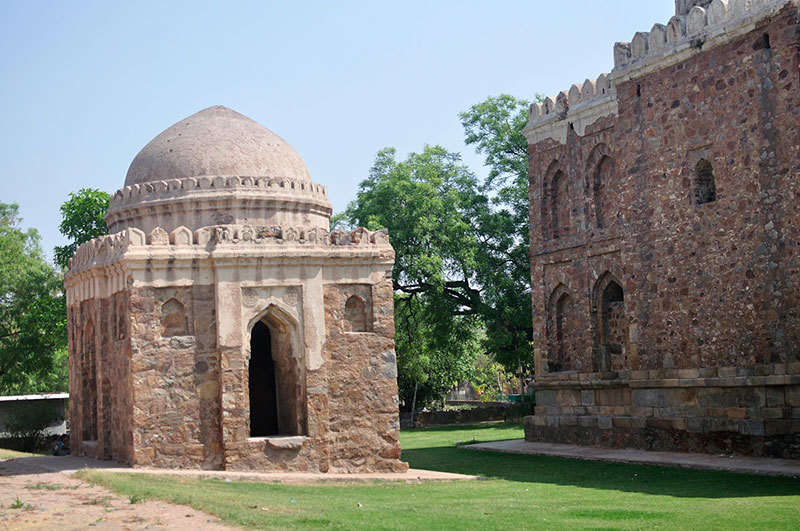 All of these are square shaped with semi-circular domes but there is no particular uniformity in the way the entrances of these tombs have been built. Some of them have mihrabs on the walls indicating that they can be used as wall mosques. They’ve also gone through some recent renovations going by the coats of fresh plaster.

Why some people treat them as shrines remains a mystery and soot from the oil lamps seem to be actually damaging the graves. While the compound is protected by robust rubble walls, the compound does have some inhabitants who can be seen washing clothes in front of the tombs at times. Encroachment is nothing new for Delhi’s monuments but at least in this case, there is enough empty space remaining in the compound. 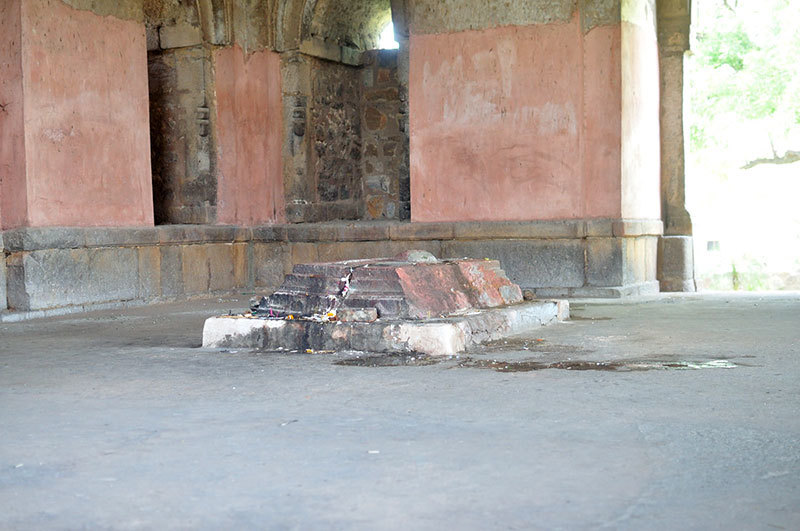 Finding these monuments is pretty easy. Reach Vivekananda Road and enter Sector 5. They should be visible after a while as you walk into the area. Look for a UCO Bank ATM and a shiny white gurudwara as nearby landmarks. There is a public park too, on the opposite side of the road which is full of colourful flowering trees and shrubs.

One of the lesser-known monuments in Delhi, the five gumbads here in RK Puram are worth a visit - come drop by, picnic basket in hand!